You may have heard that April is Driver Distraction Awareness month. Over the past few years, as cellphone usage and ever more complex vehicle interfaces increase the cognitive load while driving, there has been a sharp increase in accidents related to distractions behind the wheel. Calling attention to this dangerous epidemic is important in order for us to better appreciate and understand the scope of the problem. If we can determine the cause, then I believe that we can collectively find a solution.

The facts that we understand today are that according to the National Highway Traffic Safety Administration (NHTSA), 963,000 drivers ages 16-19 were involved in police-reported motor vehicle crashes in 2013, which resulted in 383,000 injuries and 2,865 deaths.[1]

The historical perspective gained from police report analysis indicates that 14% of all crashes involve driver distraction, with 7% of these (1% of overall crashes) involving distraction related to cell phone use.[2]  However, as police reports are always written after the accident, it is often very hard to determine what was truly the cause.

In a recent study from AAA, we are now able to get a much clearer perspective of the problem. Unfortunately, these previously relied upon statistics profoundly underestimated the gravity and prevalence of distracted driving, and revealed that it’s a much bigger problem than anyone had thought before.

In this AAA study, thousands of videos of drivers were captured and analyzed from the time of collision, and it was found that distraction was a factor in 58% of teen crashes.

To most of us, the term “distraction” means “texting”, but what was revealed in this study is that cell phone use isn’t the only deadly distraction. Here is a list of the top 7 most prevalent distractions and the frequency at which they’re responsible for accidents: 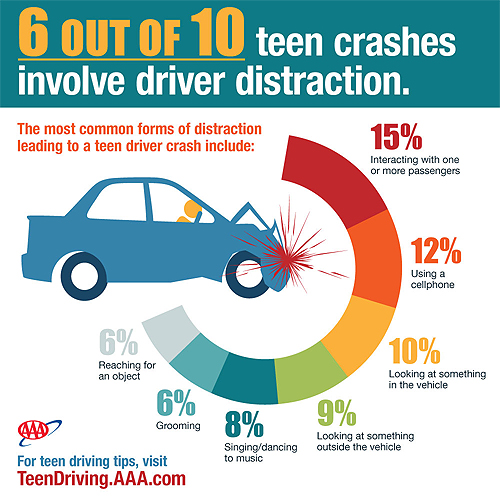 EDGE3 believes that vision analytics technology is an important component in helping address this problem. It will be a long time before we have fully autonomous cars roaming the streets by themselves, making decisions that are as nuanced, reasoned, or as rational as the ones we make on a daily basis to avoid hazardous conditions. Absent that magic bullet, we have no choice but to look at distracted driving more holistically. It is entirely possible that cars will have periods of autonomous control when on a highway, but just as airplanes still require pilots even though they have auto-pilot, people will also always be needed and central to the task of driving. At EDGE3 we use interior mounted cameras to monitor for any of the above distracted behaviors (and more), and then alert the driver to dangerous issues, or engage the ADAS (Advanced Driver Assistance System) to employ emergency responses. A combination of intelligent monitoring of driver behavior and semi-autonomous driving will likely be the right answer to not only mitigate distracted driving, but even help preempt countermeasures for it.

Jon is Senior Vice President of Business Development & Operations at EDGE3, and focuses on building and expanding the company's ecosystem through strategic partnerships, new product launches, and go-to-market activities.

EDGE3 Technologies is a leading supplier of end-to-end Ambient Artificial Intelligence and Vision Analytics products in the automotive, transportation and logistics industries. EDGE3’s award-winning solutions improve the safety of consumer automobiles, commercial fleets, and public transit systems.  With a focus on comprehensive AI-based in-cabin monitoring solutions for all vehicle segments including autonomous vehicles, EDGE3 develops solutions to monitor drivers, occupants and various personal items. EDGE3 was recently awarded the 2018 CES Innovation Award for the Ambient Sensing Node, used to detect babies and pets left behind in hot vehicles.  EDGE3 has an IP portfolio of more than 150 awarded and pending US and International patents in the fields of Artificial Intelligence, Deep Learning, Computational Stereography, Structured Light, Time-of-Flight, Ambient sensing, Organic sensors, and the Internet of Things.